Closing In on Bank Customer Churn

May 31, 2007
Closing In on Bank Customer Churn
Poor treatment or lack of branches or ATMs when they move are some reasons why bank customers switch banks; consider boosting loyalty by offering and promoting sticky services, one analyst says.

Three in ten bank consumers would defect from their primary banking service provider if courted with competing offers such as fewer fees, higher rates, identity-theft insurance, or even a gift, according to "Online Banking: Stealing Customers from Competitors," a Jupiter Research report. The report slots banking online consumers (defined by Jupiter Research as online consumers with a checking or savings account) into four buckets: switchers, movers, loyalists, and diehards. In the switcher subset, 39 percent are between the ages of 18 and 34 while 27 percent are older. Report findings are based on a June 2006 Research/Ipsos-Insight financial services consumer survey of 3,316 U.S. online users.
Banks interested in enticing switchers can probably reach them in sites where financial advice is offered like bankrate.com, says Asaf Buchner, an analyst with Jupiter Research and lead analyst on the report. However, switchers' boosted propensity to jump ship can be a gift and a curse. "The challenge is that these consumers, once acquired, might switch again," he says. "Banks should counter this phenomenon by tying in the incentive to the ongoing use of a banking product or service--for example, the payment of a few bills each month for a year."
Twenty-five percent of those polled were identified as movers, banking online consumers who would change banks if they relocated to an area where their existing bank did not have enough branches or ATMs. One way to target movers is to touch them at an earlier stage "by advertising on Web sites that assist consumers in their real estate research (e.g., trulia.com, streeteasy.com, or realestate.com) or the entire relocation process (e.g., totalmove.com)," the report states.
Loyalists, comprised of banking online consumers who would not switch banks unless they felt they were mistreated, made up 16 percent of respondents. "To retain these customers, banks should focus on the issues that matter most to consumers: clear and reasonable fees, free services that remain free, adequate customer service, and tight security," the report states. "To acquire customers, banks should watch for financial institutions that fail to meet their customers' expectations, which represent an opportunity to attract disheartened loyalists."
The remaining subset, diehards--those who would not defect for any reason--represent 28 percent of respondents. However, additional survey results indicate that 22 percent of all banking online consumers surveyed admitted that they stay with their current bank solely because it is too difficult to switch. Banks interested in improving customer loyalty should offer and promote sticky services, according to Buchner. "These services, which often require a setup process, discourage consumers from switching to another bank," he says. "At the very basic level, these services include bill view/pay and alerts. Recently, banks have been adding more sophisticated services like Wells Fargo's My Spending Report, which help consumers with their personal finance management."

Popular posts from this blog 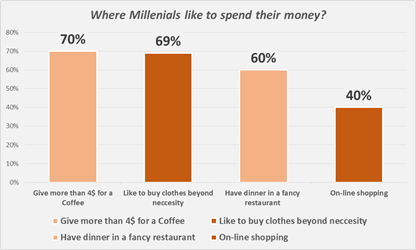 The COVID-19 pandemic changed the way customers spend their money. New habits, new needs, new channels. But this problem is not the only one that marketing and sales people have to address in our days. Brands have to face another major challenge in order to attract and keep their customers satisfied. There is a new powerful business segment around here… Millennials: The new business segment in market. Millennials poised to be the biggest spenders, as they move into their prime earning and spending years, so millennials dominate conversations around product strategy, marketing, sales channels. The economy in one word. This generation is so different, so all brands must see and interact with them as a unique consumer in order to draw their attention and business. Let’s take a look at who Millennials are, what are their purchasing habits and why they buy. They were born sometime between 1982 and 1996, so they’re around 25 – 39 years old. Only in the U.S. there are more than
Read more